If you do not know Hamilton, let’s catch you up with what everyone else in southern-Ontario ‘knows’ about Hamilton. It is a post-industrial, blue collar “Steel City”. It is often notorious for a ‘rough’ downtown core, a ‘nicer’ west-end featuring McMaster University, and recently a budding art scene along and around James Street North [located in western downtown Hamilton]. James North is also the site of a monthly art crawl. The second Friday of every month all the galleries open their doors in the evening to showcase their work, attracting crowds of over 500 people to the area every month. That number, by the way, is growing.

The James North area is a spot of particular dissension – the gentrification debate is raging between Richard Florida’s pro-creative class cronies and Jane Jacobs’ social preservationists. If you are paying attention to the academic and media debates it can seem at times like it is the shelters vs. the boutiques, the community organizers vs. the large-scale institutions, or the hipsters vs. the Italian/Portugese community.

This is not a dichotomy that is unique to Hamilton, but it is one that is affecting Hamilton urban planning and development immensely at this time. Richard Florida’s widely critiqued ‘Creative Class’ argument, that cities should attract creative industry in order to support their economy, is used to equally prove and disprove the benefits of gentrification, from economic and social justice angles respectively. Carl Grodach, of the University of Texas, points out that no matter what the critiques of Florida are, there should be an alternative interpretation for the cultural economy, defined here “by those products, services, and establishments that relate to education and entertainment and are of high symbolic value” [i].  Grodach suggests that incorporating the concept of community-based arts into the cultural economy definition could be beneficial – rather than treating art, or creative production, as an economic resource or industry it could be seen as a means of development and empowerment for specific communities. 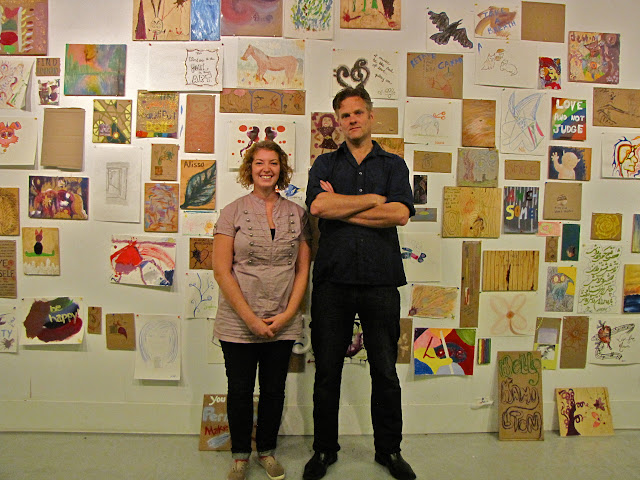 Arts-based community development programs are already taking off in Hamilton. The Urban Arts Initiative, and the programming there is an excellent example of what is going on. While there are many art programs for at-risk, street-involved, and homeless youth in Hamilton, and art is an incredibly successful and popular creative outlet for these youth, Tor Lukasik-Foss of the Urban Arts Initiative explains that “it seemed like the Hamilton community at large didn’t have such an awareness of it, the art seemed to swallow itself in a way.” The Urban Arts Initiative seeks to draw the community in to the art-making process, and create a networking hub for various youth-targeted art programs.

Traditionally, community spaces are public spaces. Yet, what is public for some is not public for all, and while some public spaces can send invisible signals as to who belongs and who does not, art spaces – particularly open access, free art spaces such as galleries participating in the art crawl – can serve to bring diverse groups of people together, stimulating unique dynamics within that interaction [ii]. Yet, many of the spaces popping up on James North are not always welcoming to a diversity of populations – Amber Aasman, also of the Urban Arts Initiative, indicated that in her personal experiences the youth participants are at times uncomfortable in the hip, artistic culture of James North because they are not of the same general demographic as that of the rest of the street. Tor expanded on this: “For these youth there’s a tacit understanding that they don’t have money to buy stuff at the AGH or Design Annex so they shouldn’t go into these stores.”

The commodification of art in private spaces creates what Sharon Zukin refers to as ‘liminal spaces’. Zukin sees these spaces as “slipping and mediating between nature and artifice, public use and private value, global market and local place” (iii). The silent exclusivity created by these private businesses can be prohibitive to creating a truly public environment on the street. Tor and Amber are striving to work with the proprietors of such businesses, who are often allies with community programs like the Urban Arts Initiative, to overcome these barriers for their participants.

Tor and Amber stressed their role in empowering the youth to take control of the space. Their space is situated such that on a busy art crawl, they get very heavy drop-in traffic. As facilitators, Tor and Amber try to encourage participants to plan their exhibitions for art crawl, and take advantage of the diverse crowds to make their work a truly public exhibition. The community that is created through the artistic processes of creation and exhibition is a multilateral one amplifies the benefits of the artistic process rather than restricting it to youth and social service workers.

This community engagement, youth empowerment, and networking opportunities presented by this space have already benefited the Urban Arts Initiative. One of their youth participants led Tor and Amber to Sam Sivasubramaniam and Adam Trapp of the Roots 2Leaf project. Sam and Adam work to provide free programming that teaches and mentors youth in the root elements of hip-hop (urban visual arts, beat production, creative writing, and break-dancing), and are now providing programming out of the James North Space three times a week. Having a youth participant facilitate that connection demonstrates incredible leadership and empowerment, and the program is just getting started. 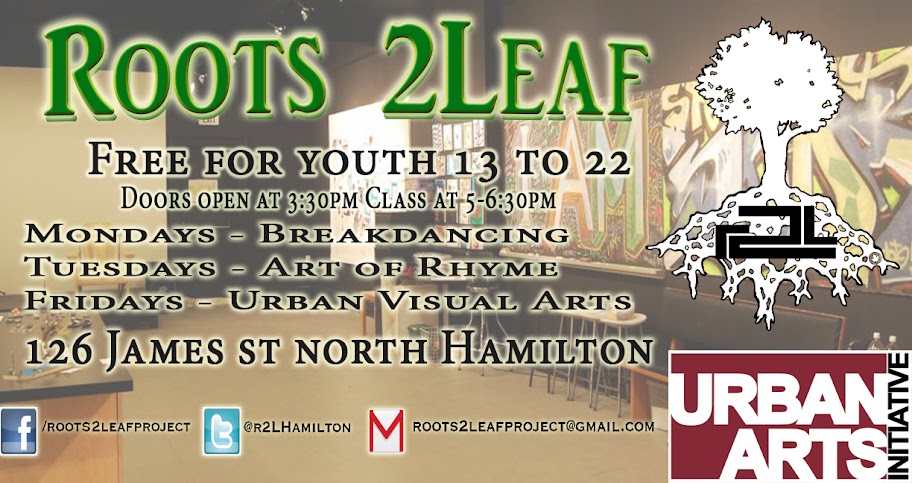 Sam explained the goal of Roots 2Leaf as being an opportunity for them to “give [youth] a tool that they can use to express themselves in a positive and creative manner”.  Hip-hop is relatable to many of the youth and the vibrant Hamilton hip-hop community has certainly been seeing the results of these workshops already. When Adam and Sam saw a need for hip-hop programming for at-risk youth they created Roots 2Leaf with no funding or sponsors. They were taking responsibility for their community; Adam explained that “if we don’t change it ourselves then the only person we have to blame for that at the end of the day is us”.

While Roots 2Leaf is not a physical space, the community that the programming is building may be a way for youth to stake their spot in the rapidly changing environment of downtown Hamilton. “It helps them create their identity” Sam said, “It’s just providing constructive things in the community – for the people, by the people.” Tor communicated similar sentiments on behalf of the Urban Arts Initiative, “[The youth] have a big stake in the geography here…they can use a space like this to entrench themselves and to stake their rightful place on this street”.

A participatory environment like the Urban Arts Initiative running programming that organizations like Roots 2Leaf are offering can counter the forces of gentrification that can divide, exclude, and privatize an otherwise public experience. While art is certainly instrumentalized in this analysis of community art spaces, it is not commodified and exploited for economic gain such as in Florida’s arguments for arts-based economic development. This would certainly encourage an inclusive arts scene in Hamilton. In the gentrification and Arts debate – spaces like the Urban Arts initiative should be taken seriously into account as a model from which we can learn more about the Hamilton community as a whole – and rather than a destructive critical debate about what’s happening in our city, this project offers a positive alternative path for arts-based community development. The time has never been riper for this kind of project and the future certainly looks bright for its various programs.

The Urban Arts Initiative is located at 126 James Street North and is facilitated by community artists Amber Aasman and Tor Lukasik-Foss. They can be contacted at uai.hamilton@gmail.com. The Roots 2Leaf project runs programming out of the Urban Arts Initiative on Mondays Tuesdays and Fridays, and can be contacted at roots2leafproject@gmail.com. Both projects are always looking for sponsors, volunteers, and participants – please contact them to find out ways in which you can get involved.
________
Alexandra Epp is a fourth-year undergraduate student at McMaster University in the Arts & Science program. Her research areas include cultural studies, development studies, and economics.

NOTES
[i] Grodach, C. (2011). Art Spaces in Community and Economic Development: Connections to Neighborhoods, Artists, and the Cultural Economy. Journal of Planning Education and Research,31(1), 74-85.

This entry was posted in Featured Articles and tagged Alexandra Epp. Bookmark the permalink.