The Arts in Hamilton: The Good the Bad and the Way Forward

How do you feel when you see Art is the New Steel?

Hamilton, Ontario is gaining a reputation for the arts – but where does this identity leave the Steel City rhetoric of days gone by? Some say that “Art is the New Steel” is a city finding its voice. Is this to imply that the steel workers who built the city had no identity before?  Some say that the creative economy could bolster Hamilton like steel did – but can there ever be that kind of economic boost from one industry, and would that be wise? 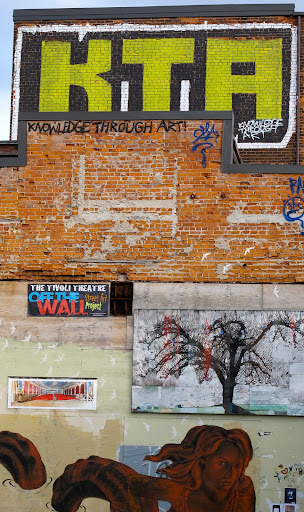 Street art in the empty lot by the Tivoli Theatre on James St. North in Hamilton Ontario. Picture taken Nov. 4, 2012

Maybe it is time that we as a city – as a community – looked at the vast array problematics and opportunities presented by the arts in Hamilton. The issues surrounding the artistic culture of Hamilton are linked to larger debates of social organization, the crisis of the public, and the economic struggles of a city in need. The arts have an enormous potential to foster creative growth, critical perspectives, and engaged communities. Carol Becker, the Dean of Columbia University School of the Arts, writes extensively on the importance of artists in the 21st century – and the need to constantly reflect and redefine their roles and responsibilities to society. What roles and responsibilities do our artists take on in Hamilton today?

Nolan Matthews investigates the forces of gentrification at work in the arts community in Hamilton. Which voices are we silencing in an effort to ‘clean up the streets’ and how could we go about creating our ideal neighbourhood? Isabelle Dobronyi, in her article about the new studio on Barton Street, The Hamilton Audio-Visual Node (HAVN), identifies a group of McMaster graduates who have decided to remain in Hamilton and invest themselves in the artistic community. Alexandra Epp offers an in-depth study on the successes and potentials of arts-based community development in Hamilton , and in our video sidebar Hamilton hip-hop legend Lee Reed talks about art, activism, and the Hamilton music scene.

New content will be added as it becomes available, so keep checking back for more engaged scholarship on the Arts in Hamilton. This issue has been produced entirely by undergraduate students.